I Support All Women

As part of a real-time marketing operation inside Itaú Bank, our role was to identify conversational opportunities to interact, always aligned with the Bank culture.

Itaú Bank is a sponsor for all Brazilian teams. But why they never communicate anything about female football? The Brazilian female team has many achievements and the best athletes in the world. But do we know who they are?

With the arrival of the 2019’s Female World Cup, we saw the perfect opportunity to repair such a mistake.

It was time to use the bank’s communications to give light to our champions, to speak their names out loud and let everyone know how talented and accomplished they were, all in time so people could cheer and support them during the championship.

What was expected to be simply a digital film has gained the company’s full attention and has become Itaú’s head campaign at the time, which has got air time on national television.

Apart from the film, we have produced a full digital campaign for every platform: cuts for Facebook (showcasing the brand in the first seconds of the film to boost brand awareness), specific films and GIFs made for IG Stories, and a real-time content creation to interact on Twitter during the games (using meme language on conversational ads and select assets for the community management team interactions).

The campaign success has made the public opinion about the Bank rise significantly. Famous personalities and other brands have interacted with the Bank, and we have won a “Golden Tweet” prize from Twitter to celebrate the most engaged tweet from the Female World Cup. 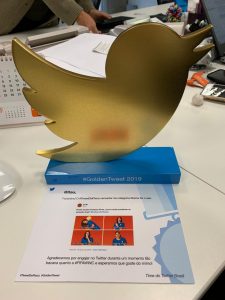 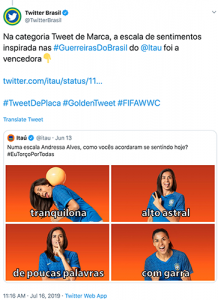